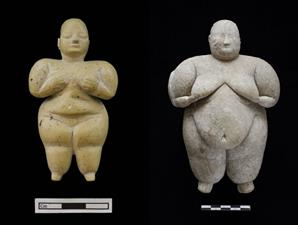 Two very well preserved, 8 thousand years old stone figurines depicting naked women were discovered by Polish archaeologists during this year’s excavations in one of the oldest cities in the world – Çatalhöyük in Turkey.
“Both figurines were discovered next to each other inside a house built at the end of the settlement activity, between 63 and 61 hundred years BC. Initially, we thought that we found another piece of ceramic vessel – then it turned out to be a belly of a figure” – explained head of the Polish expedition Prof. Arkadiusz Marciniak from the Institute of Archaeology of the Adam Mickiewicz University in Poznań.
The figurines were lying on a platform, bench adjacent to one of the inner walls of the house, made of mud bricks covered with white plaster. The smaller figurine, with the height of approx. 7 cm and weighing only 55 grams, is made in a more precise manner. The larger one measures approx. 17 cm in height and weighs 1 kg. The latter is made of marble; the smaller of limestone. They depict naked, full-figured female figures.
“In the case of the smaller figurine are even the physiognomic characteristics of the face are visible, as if it were a portrait!” – Prof. Marciniak said with enthusiasm. The room, in which the discovery was made, is located in the eastern part of a large house with the area of approx. 40 sq. m. It was significantly larger than any other house known from this period. “It was the part of the house that we call clean or ceremonial. Western and southern parts of the house were used for utilitarian purposes” – he added.