“When you kill someone, you kill yourself”

I have always had a fascination with belief systems that manifest into full blown religions. We tend to think today of the Abrahamic faith’s i.e. Judaism, Christianity and Islam, then we acknowledge the Hindu’s, Jain’s the Taoists and Buddhism, however there are so many religions that most of us never hear about unless we start to dig into history. Since I am searching for genetic and historical information that leads to the distortion of the importance of the feminine face of God and how, the Great Mother Goddess was highjacked by patriarchy to be referred to as God with a male pronoun, I am often led to some very interesting discoveries.

Hera,  (pictured above) Greek queen of goddesses, represents the power of women to stand for what they know is right, even in the face of societal disapproval and scorn.

The Goddess Oshun/ Yemaya’s colors are blue and white, and She is said to wear a dress with seven skirts that represent the seven seas. Sacred to Her are peacocks, with their beautiful blue-green iridescence, and ducks. The number seven is Hers, also for the seven seas.(Pictured below)

I have for some reason for as long as I can remember adored the Peacock, certainly for its beauty, its colors, its place in mysticism and as a magnificent living thing. I also love it for its independence and the mere siting of one sends me into a series of ooooh’s and ahhhh’s.

Before I met my talented husband, Nazim Artist who is a painter from London, I had a painting commissioned to honor the spirit of the Peacock and my adoration of them and that occurred just by chance. A lovely friend, named Melanie who knew I loved Peacock jewelry, artifacts, etc., did a quick little pencil sketch of me in my Star Trek hairstyle/lYeoman Martha Landon look from back in the day with a Peacock over my shoulder  which depicted me wearing an Indian peacock colored necklace that I had on, on the day she visited with me at a Star Trek convention and the necklace is depicted perfectly in the painting below.

For some reason the minute I saw this little pencil drawing I started to cry and have cherished it ever since. At that same convention I took it to an artist who was vending there who was also a creator of greeting cards and he agreed to colorize something like it for me using one of my Star Trek photo’s. It almost ended there, but for attending another media event where I showed piece to my friend, a fine artist named Mario Della Casa and he said let me do a painting for you. We agreed on a price and he did the painting and Nazim and I both love it and Mario, too! 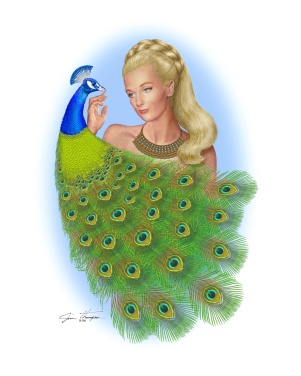 People continued to send me wonderful gifts of Peacock artifacts, including one dear friend who had her father in Iran have made for me a golden peacock. And another gave me whilst visiting Graceland for an Elvis event I appeared at replica’s of Elvis’s Peacock doors!

Ok…leaving this bit of my Peacock obsession aside, I started reading a very interesting book,  by Gerard Russell,  entitled , “Heirs to Forgotten Kingdoms,” having heard the author speak on a PBS radio program and I found it so interesting because in this book he covers his meeting with and journey to the disappearing religions of the Middle East. Reading it, I uncovered something amazing and that is that there is a religion and a people called the Yazidis’s who believe that the Peacock, Melek Taoos is a symbol of God. They are a suppressed people these days  who have been murdered by the thousands by their oppressors (those who call their Peacock Angel, the devil).  This link will help you understand the Yezidi’s current plight. Everyone I believe will enjoy the reference to Gobekli Tepe in this YouTube interview as they believe their people have been here for one million years. They believe they are the oldest people of the Earth..fascinating!

Since the religions we all encounter for the most part seem to worship or refer to god with the masculine pronoun and suppress the feminine face of God, I like to try and find out why and here again I see the hand of the Sumerian god Enlil. Enlil as you recall in the Sitchin translations and other accounts of the Anunakki, is the son of Anu and Antu (his half sister) and is the half brother to Ninmah and Enki. He raped the Goddess and medical team member Sud, was banished, but she forgave him, they married and she became his queen, the Goddess Ninlil. It is Enlil that most ancient alien theorists including myself believe  today is the god the world religions call YAHWEH and worship, kill and die for. Interesting..they seem to forget that this god was a rapist, but that is ok if your victim forgives you and marries you. Please see my blog regarding how there may never have been a God as we know him today but for the presence of Mrs. God! Mrs. God you will learn morphed into the Shekina. 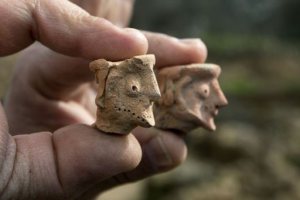 Who Are the Yezidis?

I found on line, a very interesting website www.YazidiTruth.org that has more to offer than George Russell’s book on these people however Russell risked his life to visited the countries and people involved and actually got to meet  leaders and members of this community and many other fringe groups. “The Yezidis are a Kurdish speaking people who live principally in northern Iraq. They number approximately 800,000. They are mostly a poor and oppressed people, but they have a rich spiritual tradition that they contend is the world’s oldest. They claim that they were the first people to be created in the Garden of Eden, which they further claim is a large area centered in what is now known as Lalish in Iraq. A vestige of the Yezidis’ Garden of Eden era is reputed to be Gobekli Tepe, a recently discovered archeological excavation in southern Turkey that has been dated to approximately 12,000 BCE. It has also been likened to the Garden of Eden as back in the day it was lush and teaming with many animals and crystal clear flowing rivers, etc. Some muse that Gobekli Tepe is so mysterious that it appears as if the gods and goddesses came down and created it..not too far fetched when you read the Sitchin accounts of the Anunakki.

During and after a great flood around 4000 BCE, the Yezidis dispersed to many countries in Africa and Asia, including India, Afghanistan, Armenia, and Morocco. Returning from their adoptive countries around 2000 BCE the Yezidis played an important role in the development of the Assyrian, Babylonian and Jewish civilizations of the Middle East. Ultimately, the Yezidis amalgamated elements of all these civilizations into Yezidism, including certain features of the Zoroastrian religion of Persia and some from Islamic Sufism, which were integrated into the Yezidi culture by the great 11th century reformer and Sufi Master, Sheik Adi.

“Tawsi Melek, the “Peacock Angel” and “Peacock King,” is the most import deity of the Yezidis. But he is not just the possession of the Yezidis, he belongs to the entire world. The Yezidis believe that they possess the oldest religion on Earth, the primeval faith that features Tawsi Melek, and that all other traditions are related to them through the Peacock Angel. They contend that Tawsi Melek is the true creator and ruler of the universe, and therefore a part of all religious traditions. He does not, however, always manifest within these diverse traditions as a peacock. Tawsi Melek has taken on many other forms throughout time.

The Yezidis do not believe that the Peacock Angel is the Supreme God. The Supreme God created him as an emanation at the beginning of time. He was brought into manifestation in order to give the invisible, transcendental Supreme God a vehicle with which to create and administer the universe. Tawsi Melek is thus a tangible, denser form of the infinite Supreme God. In order to assist Tawsi Melek in this important role, the Supreme Creator also created six other Great Angels, who were, like the Peacock Angel, emanations of the Supreme God and not separate from him. When recounting the creation of all Seven Great Angels, the Yezidis often summarize the emanation process as follows:

Tawsi Melek was the first to emerge from the Light of God in the form of a seven-rayed rainbow, which is a form he still today continues to manifest within to them (usually as a rainbow around the Sun). But the Yezidis also claim that Tawsi Melek and the six Great Angels are collectively the seven colors of the rainbow. Therefore, the six Great Angels were originally part of Tawsi Melek, the primal rainbow emanation, who bifurcated to become the rainbow’s seven colors, which are collectively the Seven Great Angels. Of the seven colors produced from the primal rainbow, Tawsi Melek became associated with the color blue, because this is the color of the sky and the heavens, which is the source of all colors.” 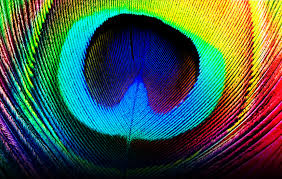 Now what becomes fun is to go back and see how and where this all came from by comparing signs, symbols and syntax and see if it weaves in with the Sumerians in any way. I feel many of these groups began as Goddess-centric communities that were overturned by a patriarchal movement to suppress the egalitarian way of life and erase the importance of the Great Mother.

In Hinduism, Saraswati (Sanskrit: सरस्वती), is the goddess of knowledge, music, arts and science. In Hinduism, the peacock is associated with Saraswati, representing benevolence, patience, kindness, compassion and knowledge. 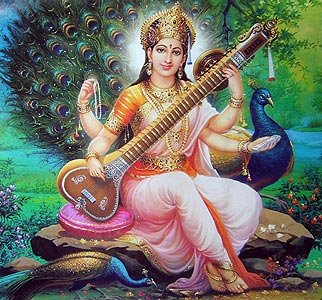 During the Medieval period, various types of fowl were consumed as food. The more wealthy gentry were privileged to exotic foods, such as swan, and even peafowl was consumed, sadly in my opinion. On a king’s table, a peacock would be for ostentatious display as much for culinary consumption. It’s hard to believe these people could do such a thing but look at the violence of then and compare it to what is done today to animals all over the world! 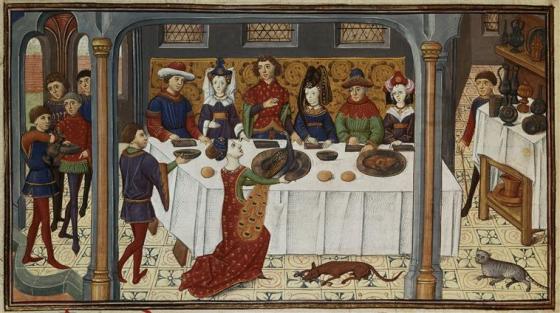 White peacocks have been adored and kept at the Netherlands’ Staverden Castle since the year 1400 when Anton’s cousin, William the Duke of Guelders, entrusted his lavish forest home to vassals, only under the condition that they always keep white peacocks to provide feathers for his helmets. The peacock feathers are now presented annually to the Commissioner of the Queen in Gelderland. The good thing about Peacock feathers is the birds are not killed to obtain them, they just shed them naturally and are collected and treasured.

One of the things we might be able to say is how far fetched is it if an entire religion can worship a peacock vs an entire population worshipping a Great Mother Goddess? 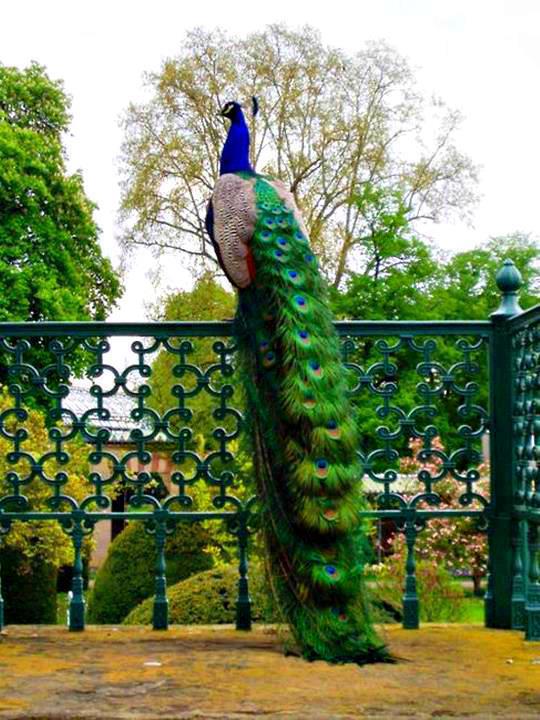 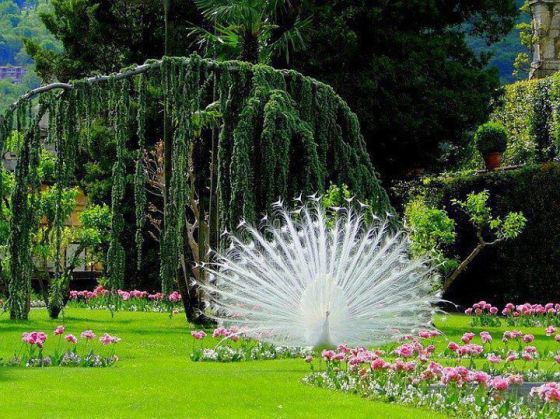 One thought on “The Peacock Angel”